Remanufacturing The Future of Sustainability

“Remanufacturing is the key to global economic competitiveness. A nation’s
ability to create global product demand, employ people, and conserve
resources is paramount to long-term stability.”

Remanufacturing: The Future of Sustainability

If you Google the word “sustainability,” be prepared for a whopping 115 million hits. But a search for “remanufacturing” produces a scant half-percent of that number. And that’s puzzling when you consider the pervasive focus on the green economy today. But the numbers tell the tale. Remanufacturing, arguably the definition of sustainability, receives relatively little market or media recognition. Although the remanufacturing industry reached $43 billion in revenue and employs over 180,000 workers in the United States, most people have never heard of this important industry.

While not in the primary responsibility arena for investment recovery professionals, there may be situations in which IR departments or equipment dealers experience an ongoing supply of surplus equipment where at least a significant component of the finished product could benefit from the remanufacturing process. In such cases, it’s incumbent upon IR to share this insight with others in the supply chain and sustainability officers.

What Is Remanufacturing, Really?

As defined by Wikipedia, “Remanufacturing is the rebuilding of a product to specifications of the original manufactured product using a combination of reused, repaired, and new parts. It requires the repair or replacement of worn-out or obsolete components and modules.”

In short, remanufacturing (sometimes referred to as ”reman”) is a comprehensive and rigorous industrial process by which a previously sold, worn, or nonfunctional product or component is returned to a “like-new” or “better-than-new” condition and warranted in performance level and quality.

It’s the process of breaking down a product, assessing each part, and remaking the product to equal or better quality than a newly produced good. And remanufacturing products is just plain smart; the ability for companies to remanufacture products is a critical differentiator from a financial, sustainability, and customer service perspective.

Remanufacturing has grown substantially in recent years. In fact, from 2009-2011, the industry grew 15 percent to reach $43 billion. 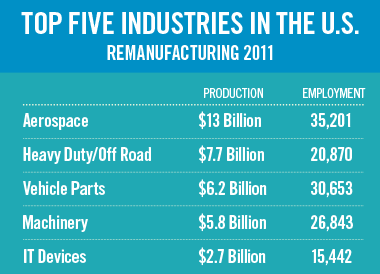 Companies that remanufacture make a profit on the exact same product, often many times over. The automotive industry is the veteran of remanufacturing techniques. Cummins, for example, produces truck engines that can be remanufactured up to three times, which positively impacts long-term profitability. Rather than replace an entire industrial engine, Cummins simply replaces failed or worn parts, such as pumps and turbo chargers, to restore the unit. In fact, in its most recent corporate responsibility report, Cummins reported that over 80 percent of its engines can be remanufactured, enabling the company to reap profits over and over while simultaneously delivering a quality product. In 2012, Cummins reached $1 billion in sales of remanufactured products, reclaiming over 50 million pounds of product.

Consumers benefit as well, saving up to 40 percent in comparison to buying brand-new products while helping to decrease the environmental footprint.

But companies aren’t exactly jumping on the bandwagon. One reason is the fear that “reman” products will cannibalize new sales. “Not so,” states a recent industry report: ”returns processing will not negatively affect sales of new products but could in fact boost volume due to improved design knowledge and innovation gained from manufacturing.” (See accompanying article, “The Lure of Like New” in this issue.)

From the Original Equipment Manufacturer’s Perspective

The business outlook for OEMs is just as promising. Their business case for remanufacturing looks at yield, cost to remanufacture, cost of new, and average selling price of remanufactured products. Using these data points, an OEM can quickly determine the profitability potential of remanufacturing and the strategy to move forward. And no matter how you work the math for OEMs, remanufacturing most often translates into revenue growth.

Sustainability Benefits: Out with the Old and In with the New

Remanufacturing is becoming an important new business model by marrying competitive business with corporate responsibility. As the world’s population continues to grow, this creates a strain on the Earth’s raw materials while producing excess waste.

From 1980 to 1997, solid waste in OECD (Organization for Economic Cooperation and Development) countries rose 40 percent, and it is expected to grow another 40 percent by 2020.

As more and more goods are produced to sustain consumer habits, the associated waste degrades the environment and creates an additional cost of disposal. Remanufacturing reduces the energy used to make new products in the same way that reuse or redeployment of a surplus or idle asset accomplishes.

In an increasingly competitive world, remanufacturing can decrease the uncertainty of raw material price swings while reducing toxic waste. Oftentimes, remanufacturing facilities are more conveniently located near the customer base, reducing the energy used on shipping and transportation.

The Challenges of Remanufacturing

Although many companies would greatly benefit from adoption, two main challenges exist today:

Companies are unable to accurately forecast returns in terms of volume and product condition. Beyond that, returns information does not include defect details that can be used to assess critical parts for repair. Visibility into all returns across sales channels is critical in order to plan remanufacturing of components. Moreover, the lack of executive sponsorship of a returns management strategy is extremely detrimental.

2. Disconnect between Design and Manufacturing

It is critical to facilitate communication between engineering, design, and manufacturing. For products to be easily broken down and remanufactured, they must be designed as such. By gathering data on the causes for returned goods, companies can improve their design process, thereby improving customer satisfaction.

The Remanufacturing Industries Council (RIC) is the leading industry body that promotes remanufacturing. In order for remanufacturing to take its rightful place in the world of sustainability, the RIC has identified two main challenges that must be tackled head-on:

1. A definition of remanufacturing should be established.

In order to promote remanufacturing, a common definition must be accepted by all stakeholders.  RIC defines remanufacturing as a comprehensive and rigorous industrial process by which a previously sold, worn, or non-functional product or component is returned to a “like-new” or “better-than-new” condition and warranted in performance level and quality.

2. Common standards must be developed.

One of RIC’s most interesting members is Nextant Aerospace. Its slogan says it all: Reimagined, Rebuilt, Reborn. Nextant is one of the first companies to successfully remanufacture jets. The Nextant 400XTi, backed by a full factory warranty and a global network of service centers, is completely disrupting its niche market. Selling for half the price of comparable jets, the 400XTi is built using a unique remanufacturing process through which an existing airframe is rebuilt with the latest technological advances in aerodynamics and avionics. Nextant is a stellar example of a company that has capitalized on remanufacturing innovation to the benefit of its customers and its profit. (Source: Nextant website)

Economics vs. the Environment: There Really are No Trade-Offs

For many years, buying sustainable products meant paying a premium. Whether buying organic food or solar powering your home, the consumer typically paid higher prices. Remanufacturing, in contrast, creates zero trade-offs. Prolonging the lifespan of goods through remanufacturing is both green and cost-effective for the retailer, OEM, and consumer. By adopting remanufacturing processes, it is possible to far exceed profits made by producing a new good, while maintaining quality standards at the same time.

In the future, “remanufacturing” could outnumber Google search hits over “sustainability.” Why? It is the key to global economic competitiveness by empowering a nation’s ability to create global product demand, employ people, and conserve resources. Remanufacturing shares many of the same guiding principles as investment recovery.

Paul Adamson is the director of business development & marketing for Spinnaker.